Are you reading my blog AGAIN?
Why do you keep coming back? Is it because I'm so witty? Or perhaps because the peripheral vision of the grotesquities of life is dimmed as you focus upon my illustrious observations on this and that. Like how I put "this and that" at the end of a sentence chock full of multi-syllable words? I do. I found it quite amusing. And satisfying. Yes.

Lately I've been watching out for all the stuff coming this fall. Yes, I've fallen victim to the mad advertising campaigns for those materialistic objects that catch my attention. Like video games. Whee! Ah, it's okay. I like video games. I really feel that they improve a few things. Mental capacities, for one (if you play GOOD games - don't be playing any Olsen twins games now). And of course, hand-eye coordination. My kung fu is mighty after mastering Ninja Gaiden! Anyway, I've been looking forward to a few things. One of which is Fable. Ooh Fable! It's going to be so good! Really, one of the games that I think will hold up to the hype. That, Half-Life 2, and Halo 2. Naturally. All of these, coming soon!

Okay, that's my advertising section (I didn't get paid a whole lot). Now it's time for my kung fu section! I've been twice this week. I was vicious on Monday. Sifu was busy, so I took charge, and put everybody through the first form rather vigorously. Making corrections here and there. Shoving people (gently, of course) when their stances were off, to make a point. That, and by the end of class, everyone had stopped to watch me instruct another student on the intricacies of our first sparring set. With Sifu's help, of course. It was interesting.

Tuesday was sparring! And my friend Christina showed up to check out what real sparring looks like (as opposed to that silly point sparring stuff other martial artists seem to be fond of). I didn't actually spar Justin that night, sadly. Maybe I should have, for her. But both he and I sparred with Louis. He's getting better, considering how little time he's been training. I usually go lightly with him, but he landed a few strong shots (and one that popped me slightly in the nose), so I unloaded a little on him. Got one quite satisfying backfist followed by a slap with the same hand, on either side of the head. A good night, though. Followed by cleaning of the kwoon! Ah, it's like a family at the kwoon.

Today I sat on the porch and played a bit of guitar. It was a beautiful day. So then Sandra came by and we went to pick up her mom's NEW CAR! Well, used, but it was new to her. And then choir practice. Without our valiant choir director! But it turned out okay. We learned some new harmonies, they sounded cool when they were working. Yay! But we have the wedding coming up this weekend. I'm a little nervous, but excited, too. I hope it goes well! We'll see.

Then hanging out with Fred. We saw Way of the Gun. An interesting film. Although Juliette Lewis freaks me out. But he loaned me Shaolin Soccer! And I'm too excited to not watch it, so I may have to do a post-blog viewing of this excellent film. Yay!

Yes, I need to see it. After finishing reading up on my Fable article (linked above), only published today. Well, yesterday. (An edit: I read the rest of it. OmiGOODness I can't wait for this. 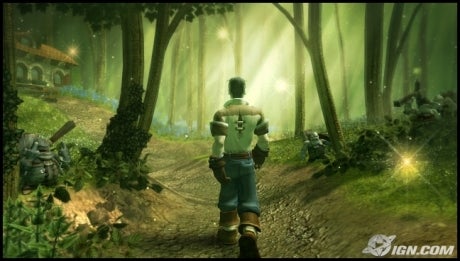 I mean just look at it!) And busy day tomorrow, so I need to get on things. Which means it's time for your random link! This one's a little weird. It's on topic with video gaming. Sort of. I think some people worry a little too much about gaming and it's influence. And some people worry about cartoons. Some people a bit differently than others.